Bell’s Looking for Will | A Book Review

His face starred as a hologram of Shakespeare on the so-called ‘Bard Cards’ of over 50 British financial institutions. That’s about 20 million credit cards starring the face of Shakespeare (or rather Bell as Shakespeare). And, furthermore, beginning in his acting roots and work for the Renaissance Faire he performed as Shakespeare himself both in the US and the UK.

His book Looking For Will looks back on his life with Shakespeare and his life as Shakespeare refracted through the light of his own prose, poetry, and playwriting (with a word or two from Shakespeare himself).

The short book falls into two parts: a preface, in which Bell gives us a rough trajectory of the rest of the book as he discusses his relationship to Shakespeare, and the rationale behind the book, but after this preamble comes the second, and longer, of the two parts: the book proper. The writing forms a kind of collage of memories as we are taken through the story of Shakespeare’s life through Bell’s poetry, excerpts of his play in which (you’ve guessed it) he played Shakespeare, and prose snippets, to provide some links between the material.

The structure is fragmentary and does not always appear to join together but once this obstacle is overcome we realise the disjointed structure is, in fact, powerfully mimetic, both of the creative process of producing verse and plays, and of course of our patchy knowledge of Shakespeare’s life.

My particular favourites in the collection were the snippets from the play, Alms for Oblivion, we are treated to, and the reimagined Dark Lady sonnets. But topping the list for me was ‘Dance of Endings & Beginnings’. Indeed this poem make be taken as symptomatic of the entire collection as we see Bell weave the personal with the public, the fictional with the biographical. In this poem the two Shakespeares, who sit comfortably together, are joined perhaps by a third: our Shakespeare. That is our relationship with Shakespeare intellectually and, perhaps for the more poetic, emotionally. Its poignancy touches on the inevitable close of play, the cyclicality of life, and the ever trotting dance of feet on the boards of the theatres. Poet, playwright, and actor beckon us – the audience – to join in the dance of endings and beginnings. A dance ‘of faires to come and faires to pass’ marked by the ‘renewal of the cov’ring grass’; a dance which is perhaps indeed une danse joyeuse.

Bell subtly ventriloquizes Shakespeare and spins his own turns of phrase and as you immerse yourself in his collection you find it to be a playful collection but one which merits more than one read. In fact perhaps to best appreciate the poetic material it would be a good idea to first read the material post-preface, and then only later to return to read the preface before reading the main body again.

Taking a similarly playful approach to Shakespeare studies and historical context as Winfield’s My Name is Will; the material in this collection is witty and sharp as well as lyrical and cadenced.

Read it, and re-read it and find your perceptions of Shakespeare subtly changed as you share Shakespeare’s journey, Bell’s journey, and embark on your own personal journey to look again for Will. 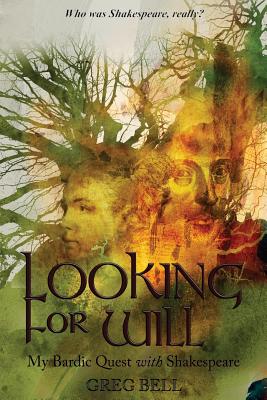 I’m always keen to read and review Shakespeare adapted novels, short stories, plays, or poems, do feel free to get in touch either by e-mail at sarahwaters@outlook.com or via Twitter where you can find me @srawaters