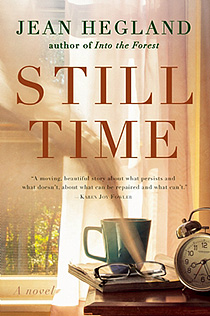 As we were beginning our time with King Lear last month (and I was mentioning that the play seemed to be playing like a confluence of a number of thoughts and emotions in my life currently: the loss of my father, the health problems my wife’s mother was going through, and the fear/reality that Alzheimer’s runs in my wife’s family), it was brought to my attention that there was recent novel that dealt with those same themes.

And thus, I found Still Time by Jean Hegland in my hands and on my Kindle.

The Amazon page for the 2015 book has a blurb by David Crystal, author of The Cambridge Encyclopedia of Language and Shakespeare’s Words:

Anyone who knows only fragments of Shakespeare will be fascinated and deeply moved by this insightful story of a Shakespeare scholar experiencing dementia. Fellow Shakespeareans will delight in the way the myriad allusions to the plays are intertwined with beautifully crafted elegiac descriptions of the old man’s life in a home and his dissolving family memories. Still Time is a novel Shakespeare would be proud of.

If you’ve followed this blog, you know in what high regard I hold Crystal (and his son Ben)… but, those are some bold words. Could the book live up to them?

The book concerns John Wilson, a Shakespeare scholar and professor, as he descends into Alzheimer’s. The book is told from two different vantage points, John’s and that of his estranged daughter Miranda (Tempest alert!). The latter tells a rather straightforward narrative, but John’s–since it is from the mind of one who is succumbing to dementia–is a more tangled yarn. That yarn–that story–is spun from many different yarns, different varieties of threads or styles; and as his old ways of remembering and communicating slip from him, more of the of diction and syntax pulls from what he’s life has revolved around: Shakespeare. Stylistically, the novel is wonderfully crafted.

Thematically, the book speaks to a number of my fears, losing my own personal memories only to metaphorically drown in what’s left (the scholarly memories of Shakespeare), losing my wife to a similar fate, just losing her, me or either of our two sons.

Because it speaks so specifically to those fears, maybe that’s why I was so affected by it. Or perhaps that’s merely the reason I gave the book the chance to work its magic on me. But magical it is. And beautiful.

Regardless, by the time I was done, I felt like the book’s protagonist as he finishes a late-life re-reading of King Lear:

Nothing but the stillness of his green room and the I am of his still-beating heart. Nothing but the small stir of his next breath and the monotonous leaking of his scalding tears—such a meager trickle compared to that torrential waste and loss and woe.

Nothing. As from Lear. That “I am of his still-beating heart” … it’s the iamb of the rhythm of the language of the heart, blank verse. And those tears I felt on my own cheeks.

While I’m sure that those with a love of Shakespeare or a fear of dementia will be particularly caught by the story and its telling (and if you’re reading this blog, you probably are in one of those two groups), I believe that a general audience will be touched by this novel as well.

I recommend it very highly.