A Gallimaufry | Speak the Speech

Many apologies for the delay on this week’s column, groundlings. I wish I could claim something truly dramatic as the reason for my tardiness, but it really all came down to suburban gridlock and a slow-moving bus. This week’s slate of opening and continuing productions offer an escape from the mundane, ranging from operatic heights to the ever so slightly lower brow fusion of Shakespeare and….. zombies?

The Canadian Opera Company’s production of Verdi’s Falstaff brings the fat knight to full-bodied life in Toronto, with Gerald Finley in the title role. Robert Carsen’s production has played in London, New York, and Milan, setting the Windsor hijinks in the second Elizabethan era – the 1950s. I’m personally tickled by the production’s tagline: “No money. No morals. No problem.” The curtain rises on Friday, October 3rd with closing night on November 1st. For more details, photos, and video, check out the COC website. 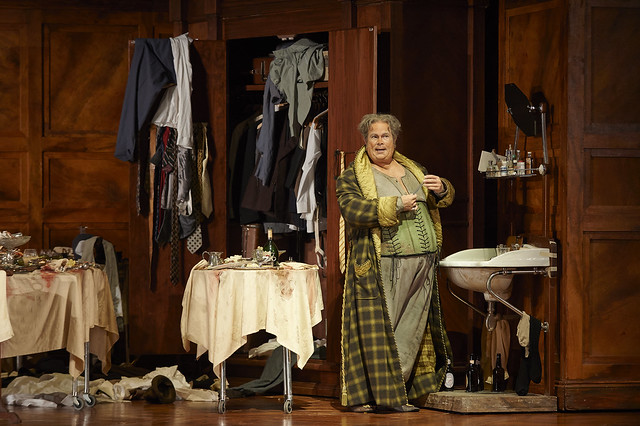 For whatever reason, my columns seem to coincide with intriguing student productions. It’s not strictly Shakespeare, but John Heimbuch’s play William Shakespeare’s Land of the Dead certainly has an intriguing premise: the playwright, Queen Elizabeth, and Francis Bacon are trapped in a quarantined Globe theatre under siege by the living dead. Director Kelly Reay promises gore by the bucketful, making full use of the technical students’ skills to provide maximum impact.

Tempest on a Heath in the Windy City

Barbara Gaines’ production of King Lear for Chicago Shakespeare Theater on Navy Pier, in their Courtyard Theater, continues until November 9th.  The production stars Larry Yando as the aging monarch and Ross Lehman as the Fool. The CST is putting on a really interesting season, with a production of Pericles in the new year; it will be interesting to see how the company handles that play’s very different father/daughter dynamic. They’re also mounting a production of Dunsinane, David Greig’s sequel to Macbeth.

The Three Weird Sisters in Salem

Rory earned his PhD in English literature from the University of Toronto. His thesis examines the role of language in creating and maintaining social distinction in the plays of Shakespeare. Rory has taught in several different divisions of the University: the English department, the School of Graduate Studies, Innis College's Writing and Rhetoric Program, and at the University of Toronto Mississauga (UTM).