By Sarah WatersJanuary 4, 2015 No Comments

First things first foolery lovers, Happy New Year! And welcome to a very Shakespearean 2015. In a year’s time we’ll be singing in the celebrations of the 400th anniversary of his death so this year is the party that precedes it. The pre-drinks if you will before the main event. Preparing this week’s stories has come at that rather odd time between Christmas and New Year where no-one really knows quite what to do with themselves but there has been plenty of Shakespeare frivolity to amuse yourselves with, and this week’s column brings you a selection of the Shakespeare holiday treats out there.

First up, as this is the New Year and for many a time for making (and then probably swiftly breaking) resolutions how about making Shakespeare a big part of that and taking up the challenge to read Shakespeare’s canon in a year. You don’t even have to come up with the reading plan yourself; Matthew Franck has done the hard part here. And it’ll only take up half an hour of your day, that’s a tube ride, a lunch break or a bedtime reading slot. The weekdays are for plays and the weekends for poems so you get a real mix of material. And kicking off with Two Gentlemen of Verona this plan is easy to manage and a great way to pepper your year with Shakespeare. Why not check out what you’ll be reading on your birthday (I’ll be reading Coriolanus on mine), Christmas, thanksgiving – well, you get the picture!

Sticking with New Year’s resolutions for a moment, over at Good Tickle Brain there’s a collection of cartoons with Shakespearean characters and their resolutions. The best of which is arguably Hamlet’s: “to be”.

Are you familiar with and a lover of the Horrible Histories? I’m thinking specifically of the TV adaptations of the Terry Deary books. You know the Terrible Tudors and the Rotten Romans to name a couple. If you’re a lover you’re in luck because this year sees the release of Bill – it’s a horrible histories adaptation of the life of Shakespeare and you can bet it’ll be with all the grisly bits left in. It’s a movie set for release in March 27th and sees Shakespeare the lute player, in those elusive ‘lost years’. 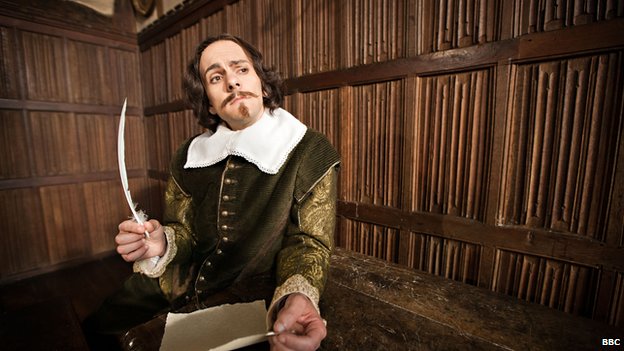 Starring Matthew Baynton and Ben Willbond among others Shakespeare (the lute player) heads away from home to follow his dream and this movie follows his story. It’s set to be action packed with “murderous kings, spies, lost loves, and a plot to blow up Queen Elizabeth”. This is a family comedy and well worth checking out when it hits our screens. To check out the trailer click here.

But most of all I hate you..

Earlier this week BuzzFeed published an article the subject of which was a film which loosely appropriated a Shakespeare play for its focus: 10 Things I Hate About You (or it’s precursor which even rhymes with it for a handy reminder, The Taming of the Shrew). The article is titled ’20 Reasons “10 Things I Hate About You” Is a Cinematic Masterpiece’ and as the collection of gifs, images and witty captions make clear this adaptation of Shakespeare is still just as good as it was when it was released 15 years ago. Still not convinced, check out the article, go and watch the film. And if all else fails at least check out this dance. Definitely Shakespearean!

Archbishops, Shakespeare and The Simpsons

Yes, you read the heading correctly. Last Sunday The Observer published an article entitled ‘What I learned from the word of the Bard’ an interview with the former Archbishop of Canterbury, Dr Rowan Williams. Who has, so the article informs us preached on Macbeth and king Lear and when asked if in the absence of a Bible if he could teach his faith from Shakespeare he replied, “I’d have a jolly good try”.

Williams considers his Shakespeare lived on the edge, citing Macbeth as a case in point and making reference to Mr Burns, of Simpsons fame – much to the surprise of the newspaper reporter.

For a look into the mind of a man we perhaps know best as an archbishop, but is also a highly successful writer and academic, what better route in than Shakespeare.

And finally for a spot of New Year fun, here’s a tumblr feed of things that Shakespeare didn’t say but perhaps we wish he had. like “We’re on a mission from God” (probably Henry V). Until next time foolery lovers, keep foolin’ around with Shakespeare and ring this New Year in Shakespearean style – the best way to do anything!

Everything Necessary: A Talk With Jeff Watkins | Shakespeare in the Southeast

Everything Necessary: A Talk With Jeff Watkins | Shakespeare in the Southeast