By Shakespeare NewsJune 28, 2013 No Comments

Hello and welcome to this week’s Foolery post, the best place for quirky Shakespeare news.

Talk of Joss Whedon’s adaptation of Much Ado about Nothing has been on many a Shakespeare fanatic’s tongue, but get the full scoop here in Whedon’s interview with Stephen Colbert on The Colbert Report. Their wits match very evenly as Colbert ribs him for using his own house to shoot, and “selling out” by doing Shakespeare (after making the $1.5 billion Avengers movies).

An icon from another medium, that of musical theater, also teamed up with Shakespeare recently on a project. Jason Robert Brown, composer of The Last Five Years and Parade, wrote a song with lyrics from Hamlet’s advice to the players (or playahz, as Brown refers to them). Give it a listen here!

Most of us know that Shakespeare invented (or at least was the first to record) hundreds of words. But did you know that some words we use as slang today actually come from centuries ago? Take a look at this article. Especially note the “bonus” joke – one of my favorite lines in Shakespeare.

And to wrap up this week of Foolery, let’s look at some cartoons! 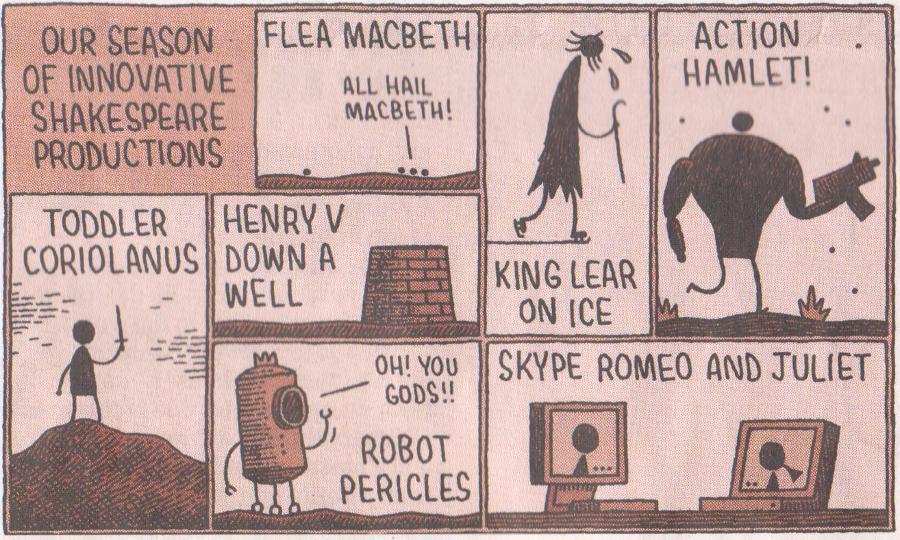