Well, not quite — but if your area school follows the traditional academic calendar, there may be anywhere from two to six weeks left of school before summer vacation begins.  So as the freedom of another sweetly imagined “endless summer” calls to the spirit of daydreaming youth in all of us, we look at some different takes on the question of how young people are best introduced to Shakespeare, and what role schools might play in that matchmaking moment…

Teacher Allan Deck, whose visit to a Finnish school inspired a new approach to his teaching back in Canada.

What, upon compulsion?  Zounds!

If even 400-something years ago children would creep “like snail/ Unwillingly to school,” and if part of what makes school no fun is that you have no choice about anything you do there, then it follows that the works of Shakespeare – being cemented into most compulsory public education systems in the English-speaking world for generations – can sometimes sink under the weight of all that… compulsion.

Perhaps the Finnish approach to high school education would be better, argues one Canadian teacher, as reported in a recent article in the Globe and Mail of Toronto.  With the somewhat provocative headline “Enough Shakespeare. Kids want pop culture, said one Alberta teacher after a visit to Finland,” the article tells the story of a visit by teacher Allan Deck to a Finnish school where teachers had the autonomy to create their own courses and reading lists.  So Deck returned to Alberta to create a course focused on pop culture, and met with immediate student enthusiasm.

According to the article:  “The class radically exceeded Mr. Deck’s expectations. The students delved into the readings, and participated in lively discussions relating the material to their lives. ‘They wanted to be in the classroom. English class had ceased to be some teacher in a tweed jacket reading Charlotte’s Web.’”

Whether you agree with Mr. Deck’s take on tweed jackets or not (I personally still find them quite appealing, perhaps sans bow-tie), many of us might agree that if Shakespeare were cut loose to be optional in a school curriculum, students might have more fun enjoying it on their own…?  Yes, we all seek creative ways of “relating the material” of the plays to students’ lives, but the students still know it is… upon compulsion.  What do you think, you educators out there?  Send us your thoughts.  Would making Shakespeare optional at the high school level be abandoning him or setting him free? 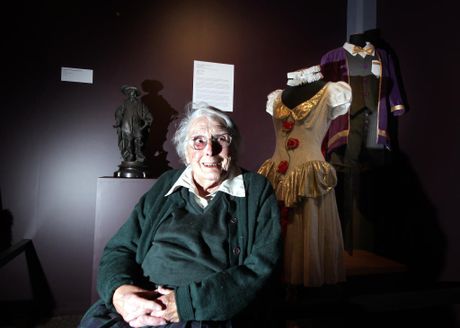 Ida Gaskin, a lover of Shakespeare’s work for 84 years, speaks at a New Zealand museum.

A great teacher looks back

As if in answer to the questions above comes this delightful article from the Wanganuis Chronicle in New Zealand on a wonderful teacher who found Shakespeare on her own and has been in love with his work ever since.

Ida Gaskin, 94, a former New Plymouth High School teacher who spoke recently to an audience at the Whanganui Regional Museum about the cultural relevance of Shakespeare, said she started as a young reader dipping into Lamb’s Tales from Shakespeare from her family’s bookshelves and then moved right on to the real thing.  Relates the article:

“Shortly after a local theatre troupe was set to stage Othello and she asked – aged only 10 – if she could go watch. “I came back very upset. She [my mother] asked what was wrong, and I said, ‘There was this poor black man who killed his wife and he was so sorry about it.’  People who say children can’t learn Shakespeare haven’t tried.”

The key to starting ‘em young?  Don’t “make a big deal” out of it, Gaskin says.  “I remember going into a class and the teacher said, ‘Today class, we are learning about Shakespeare’ – you know that look you get when horses are frightened, you see the whites of their eyes and their ears prick up? That’s what she looked like – so if you act like that of course the children won’t be into it.” 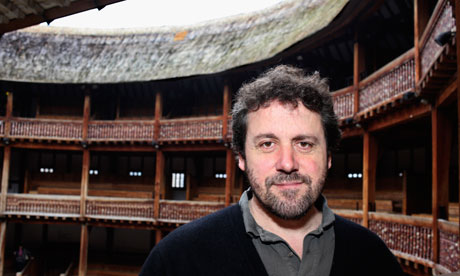 There is, sir, an aery of children, little eyases…

A company of young actors is being developed by Shakespeare’s Globe to perform in its new candlelit Sam Wanamaker Playhouse next year, announced Globe director Dominic Dromgoole.  The young people – ages 12-16, boys and girls – will make their debut in April in John Marston’s The Malcontent, originally written for the Children of the Chapel.  The new playhouse will fulfill an old dream of Sam Wanamaker’s to have a winter indoor theater to match summer outdoor seasons.

Teaching Shakespeare, a new publication of the British Shakespeare Association.

A new resource from the British Shakespeare Association

Teaching Shakespeare, published twice a year, is an education magazine of the British Shakespeare Association and is mailed free to members.  But you can dip into it online by visiting the association’s website at shakespeareineducation.com.  The February issue has a wide range of articles from “Vox Pop:  Shakespeare with Primary School Children” and “Girdle round the Earth:  Romeo and Juliet’s Winter Term in Jerusalem” to “Teacher Feature: Shakespeare and Autism.”

A new project will bring together members of the RSC and students and teachers at The Canterbury Academy.

The Royal Shakespeare Company has chosen the Canterbury Academy as a “hub” school for its national education program, the three-year Learning and Performance Network.  RSC staff will work with the local Marlowe Theatre to pass along performance-based approach methods to teachers at the Academy, which will then become a resource for a variety of area schools and the anchor of a new Shakespeare festival for youth.  The idea is to inspire fun, active approaches to the text and prevent new teaching requirements from resulting in a generation of British schoolchildren who associate Shakespeare with… homework.

Reviews are in: “Midsummer” a hit in Skaneateles!

A performance by the Syracuse Stage of A Midsummer Night’s Dream may have won over a large group of eighth graders to Shakespeare in the central New York State town of Skaneateles recently.  Thanks to a grant from the Skaneateles Education Foundation, four area middle school teachers were able to take their students to see a performance of the play.  Teacher Josh Williams, who co-wrote the grant application for the project, is quoted in an article in the Skaneateles Journal as saying:

The teachers’ hunch was confirmed in at least one review, written by student Anthony Panasci, who said:

“I think a lot of students at first were confused on why we had to sit in chairs for a couple hours and listen to some guy in the history book’s plays. But as we left, I think a lot of students changed their mind on the subject matter. What I heard was not some fantastic cheers of amazement, but a realization. Many of them said, ‘That wasn’t that bad, it was pretty cool.’

As always, we look forward to your feedback and comments about any of the stories you’ve read here today.  Let us know what you think and start the conversation!

The Shakespeare Standard is an online Shakespeare forum dedicated to bringing the online community Shakespearean news about performance, scholarship, and multimedia every day.  Please join us here at our site or on Facebook or Twitter to discuss the latest things of interest in Shakespeare news.

Notes from the Breach | If Music Be the Food of Love

Notes from the Breach | If Music Be the Food of Love