O, What Learning Is! I New books for parents and teachers, and Will the life-changer I Education News for the Week of May 7, 2013

By Shakespeare NewsMay 7, 2013 No Comments 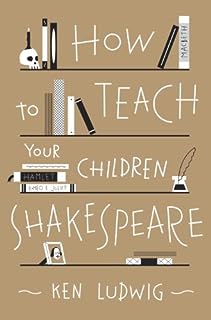 In a new book for parents, How to Teach Your Children Shakespeare, Olivier Award-winning playwright Ken Ludwig starts with a simple line from A Midsummer Night’s Dream and ventures from there into all sorts of fun – from how to inspire kids to memorize and perform verse to interesting historical background on Elizabethan England.  The book is available for pre-order now and will be officially released on June 11.  Might be the perfect gift for that hard-working educator who spent the year inspiring young people to dive into the plays….

The Trinidad Theatre Workshop production of Midsummer, touring the country’s schools this spring

A Trinidadian Midsummer tours the schools
A recent production of Midsummer Night’s Dream by the Trinidad Theatre Workshop (TTW) was launched April 11 in Belmont, Trinidad, and will be touring secondary schools around the country as part of the company’s educational program.  Seven actors play all the roles and the production is set in contemporary Trinidadian Carnival society.  “This is a celebration of flowers and paint and powder, about fertility and drinking, music and dancing,” said director Timmia Hearn Feldman. “Sound familiar? We are exploring the text through our own lens.”  The TTW was founded 53 years ago by writer Derek Walcott, dancer Beryl McBurnie, and other iconic artists. 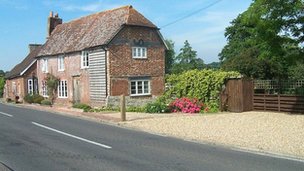 The Place House Cottage in Titchfield, once the old grammar school.

Did Shakespeare celebrate his 22nd birthday as a “humble schoolmaster” in Titchfield near Southampton?  Wouldn’t that be a wonderful twist for all of you Shakespeare educators out there?  Academics are still puzzling over the “lost years” between the birth of Shakespeare’s twins in 1585 and his appearance on the London theater scene in 1592, and a recent article on the BBC News details speculation that Shakespeare might have worked for Henry Wriothesley’s family and taught school at a schoolhouse on the property.  The building is now known as the Place House Cottage.

In a twist on the current interest in using Shakespearean themes and characters to tackle social issues with young people — well-reported in Shakespeare Standard education posts — the Shakespeare Festival St. Louis recently offered Winning Juliet, a new musical by festival Education Director Christopher Limber and playwright Elizabeth Birkenmeier that takes on the issue of cyber-bullying.  The musical is being performed by area high school students participating in the festival’s annual semester-long MetroYouth Shakespeare residency program.  Performances ended May 4.

The festival also recently hosted SHAKE38, a marathon of all 38 (depending on which ones you count!) of the plays in locations around St. Louis in celebration of Shakespeare’s birthday.  The events ranged from full productions to coffeehouse readings.

The isle is full of noises

The Hobart Shakespeareans, led by award-winning educator Rafe Esquith at Hobart Elementary in Koreatown in Los Angeles, have begun their performances of The Tempest, featuring an amazing array of music played by 53 students in grades 4-6 handling 27 different instruments while telling — with great concentration and teamwork — the story of Shakespeare’s final play.  For a sample: the moving final scene is interwoven with a heart-wrenching rendition of the final sequence of songs from the Beatles’ Abbey Road.  Check the Hobart website later in the summer for photos and video from this wonderful production.   Performances continue through May 18, but all future performances in the tiny Room 56 at Hobart are sold out!

In other Hobart news, Rafe’s new book — Real Talk for Real Teachers — is due out this summer.

And finally, if this editor may tout his own program for a moment, the annual spring “Festival of Play” at Winedale, Texas, was held Saturday, April 27, in the historic Winedale Theater Barn.  More than 125 student participants in the Shakespeare at Winedale Outreach program – a project of the University of Texas at Austin College of Liberal Arts and Department of English – performed scenes from a half-dozen of Shakespeare’s plays.  The students are in grades 4-5 and have been studying Shakespeare through performance since the fall.  They will perform at the UT Children’s Shakespeare Festival on May 9 and 10 on the UT Austin campus.

The Shakespeare at Winedale t-shirts, by the way, feature “Cowboy Willie,” a drawing of Shakespeare with a cowboy hat and bandana.  Appropriately enough, Willie Nelson — a local hero for decades — celebrated his birthday on April 30, a week after Shakespeare’s.

We look forward to your feedback and comments about any of the stories you’ve read here today.