O, What Learning Is! | The Spring Break edition… Festivals, reading groups, scholarships and more | Education News for the Week of March 12, 2013

It’s not officially spring yet, but this morning the birds were singing, “Hey ding-a-ding ding”…

Sweet lovers love the spring, as do teachers and students, because it means Spring Break is near — giving us all time to catch up on our Shakespeare-in-Education news!  So, as you lie between the acres of the rye with your mobile device/tablet, here’s what’s been happening in the world of Shakespeare and Learning… 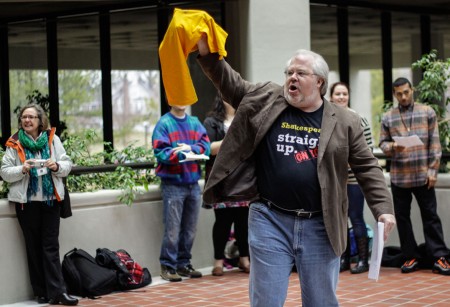 The English department at Murray State University in Murray, Kentucky, hosted its 12th annual Shakespeare Festival last week, featuring a series of performances, lectures, and educational workshops.  Highlights from the busy week included:  “Shakespeare’s Dance Party,” a workshop on Shakespeare’s use of meter that utilized rock music; an on-campus Shakespeare insult battle with prizes for winners; a stage combat workshop featuring the school fencing club; and performances by the Tempt Me Further touring troupe of the American Shakespeare Center in Staunton, Virginia.

Festival chair and Assistant Professor of English William “Rusty” Jones said he hoped students would be able to connect to Shakespeare in a new way after the festival.  “What we hope to accomplish is to diminish some of what some teachers call ‘Shakes-fear,’ which is basically a fear of Shakespeare, thinking it’s too boring or tedious,” Jones said. “We want people to see that Shakespeare is fun and ultimately we want them to have a good time.”

More than 500 middle and high school students from around central Arkansas gathered March 11-12 for the University of Arkansas at Little Rock’s 15th Annual Shakespeare Scene Festival at the Center for Performing Arts on campus.

“The Shakespeare Scene Festival provides an exciting opportunity for middle and high school students in central Arkansas to come together with the UALR community in celebration of the works of Shakespeare,” said Dr. Kris McAbee, Assistant Professor of English and the festival’s director, in an article on the university’s website. “The student performers are rewarded for their hard work of grappling with these difficult and profound texts by getting to perform them in the University Theatre in front of a large audience of their peers and community members.”

Five student participants from Bermuda Shakespeare Schools Festival have been awarded scholarships ranging from $1,000 to $5,000 to continue their study of the dramatic arts.  The three-day event is held each fall at the Berkeley Institute private school in Pembroke with the goal of supporting the dramatic arts in the country.  Somersfield English teacher Charlie Dudd said it was a special thrill for his students to perform The Tempest since some historians suggest the play was inspired in part by news of a 1609 shipwreck in the “still-vexed Bermoothes” of British colonists on their way to Virginia.  As local news coverage noted, the play was performed in modern dress, which meant – of course – “Shakespeare in Bermuda shorts.”

What Shakespeare can do for young minds

Hilary Mantel, author of the popular and Man Booker Prize-winning Tudor historical novels Wolf Hall and Bring Up the Bodies, recently spoke at the Bath Literature Festival about the impact an early encounter with Shakespeare had on her writing.  At age eight she discovered a speech from Julius Caesar in a book and, thinking this was the complete works of Shakespeare, memorized the entire speech. “Shakespeare is not just an author for me,” Mantel told the audience. “He is like a demi-god.”

Okay, I’ll read Beatrice this time:  A Much Ado born in a living room

You never know what might grow out of that Shakespeare reading group you’ve hosted for years.  Filmmaker Joss Whedon and wife Kai Cole have hosted one such group for years in their Santa Monica home, and ended up filming their new version of Much Ado About Nothing there.  Many of the actors involved in the film had participated in the readings over the years, including Amy Acker, who plays Beatrice.  Acker noted during a session after a screening at the South by Southwest Film Festival in Austin, Texas, that the spirit of the readings carried over into the filming of the play.  “It had the same sort of playfulness,” she said, “and no one was really as scared of it (the play) as we probably should have been.”  The film officially opens in theaters June 7.

In a new documentary on Shakespeare in contemporary culture, award-winning actor Mark Rylance said he is “dead against” Shakespeare being used as part of an exam system for young people.  In an article in the Telegraph quoting Rylance’s comments, the actor is reported as arguing that the “forced march to an exam test” could lead children to feel “culturally inferior” with “all their demons packed around it.”  The program, Muse of Fire, shows two young actors traveling around the world with a video camera, asking all sorts of people what they think about Shakespeare.  It is scheduled to be broadcast on the BBC in the fall.

The players are come hither:  A special day at Columbia High

Members of the Columbia High Shakespeare Club in Maplewood, New Jersey, received a treat last week when cast members of the first-ever all African-American production of Antony and Cleopatra, who performed recently in New York City, visited the school to present scenes from the play and lead a workshop with students.  The actors came at the invitation of club director and English teacher Steve MacPherson, who runs the school’s spring Shakespeare Festival.

And in other news…

A few more items of educational interest for this week:

We welcome your feedback and comments about any of the stories you’ve read here today!

The Shakespeare Standard is an online Shakespeare forum dedicated to bringing the online community Shakespearean news about performance, scholarship, and multimedia every day.  Please join us here at our site or on Facebook or Twitter to discuss the latest things of interest in Shakespeare news.

Oberon’s Orb | Multimedia News for the Week of March 11

Oberon’s Orb | Multimedia News for the Week of March 11