We begin this foolery column with Christopher Lee. He’s famed for his roles in Star Wars, Dracula, The Lord of the Rings and voicing Death in the TV adaptation of The Colour of Magic, but did you know he was also a dab hand at Shakespeare acting? He crops up uncredited in the 1948 Hamlet and the 1970 Julius Caesar, but, more than that, this article suggests Lee approached his roles with the same dedication and power found in Shakespearean actors. What do you think?

I recently came across this rewriting of Romeo and Juliet, Gossip Girl-style. It features lines like:

Ah, the morning after. Larks sing, the sun shines, and Romeo is banished. We may have to move the honeymoon suite to heart break hotel.

…a fresh and funny approach to this well-known play, well worth a chuckle over at your next coffee-break.

Because it wouldn’t be a foolery column without a Shakespeare-themed quiz, this week I bring you a ‘Which Shakespeare Play are you?’ offering; the deciding factors include images of Cliff Richard and emojis, obviously! Why not check it out to see if you’re the play you expected…or one you’d really rather not be associated with.

On the subject of emojis, have you heard about the latest teenage Shakespeare book release? OMG or similar may be a suitable reaction. Think Shakespeare meets text language. I’m talking YOLO (not a kind of frozen yoghurt–yep, I made that same mistake), lol, and emojis galore. It’s the plays, but not as you know them!

This should give you a flavour of the kind of thing to expect. I wonder what Jonson (never mind Shakespeare) who spoke of Shakespeare’s immortality might think of this new approach? The books form part of the OMG Shakespeare Series including:

While the ‘to be..’ speech becomes laden with images of bees, of course. Although these might not be the most academic of volumes and may reduce the plays simply to plots and storylines, the hope is that they’ll elucidate the stories, if nothing else, to 21st century readers tackling Shakespeare for the first time (likely with their smartphone in one hand and the complete works in another and hashtags ready in their mouths). These books seek to combine the modern way of teenage life with compulsory literature striving for accessibility over academic perfection.

Ever wondered what Shakespeare’s Yelp reviews might look like? Wonder no further! This BuzzFeed article considers that very topic, from Hamlet and tofu to parodied lines from Richard III (think discounts when you read ‘winter of our discontent’), it offers quite the variety. Here’s a sample review of Korrigan & Company: Steakhouse (make sure you read it with your pun radar firmly turned on).

Have you got any potential Shakespeare Yelp reviews? Why not share them in the comments or over on Twitter either directly to me (@srawaters) or to @shakesstandard. I look forward to reviewing the situation! 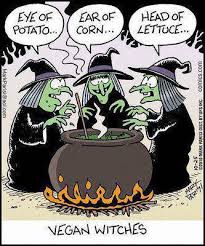 Finally, I leave you with this cartoon which reimagines those weird sisters as even weirder: in other words, vegans. Until next time, foolery lovers, keep foolin’ around – Shakespeare style!