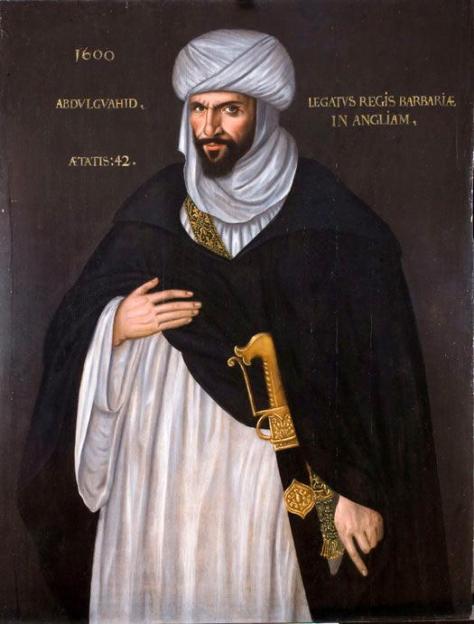 OK, as I’m wrestling with getting back on track with the Moor of Venice, here’s something very cool I’ve found from the blogs over at the Oxford University Press…

Without Islam there would be no Shakespeare. This may seem surprising or even controversial to those who imagine a ‘national bard’ insulated from the wider world. Such an approach is typified in the words of the celebrated historian A.L. Rowse, who wrote that when it came to creatively connecting with that world, Shakespeare, the ‘quiet countryman’, was ‘the least engaged writer there ever was’

That’s the provocative opening of “Shakespeare and Islam,” the posting from a few days back at the OUP’s blog.

It’s a great read, and not just because I’m in the midst of Othello at the moment (though that certainly doesn’t hurt).

Plus, the blog page got a pretty cool portrait of Abd el-Ouahed ben Messaoud ben Mohammed Anoun, Moorish Ambassador to Elizabeth I… the pop culture rock-star whose popularity might very well have prompted Shakespeare to write our current play under study…

The Time and Geometry of Romeo and Juliet [UPDATE]

The Time and Geometry of Romeo and Juliet [UPDATE]