“The Shakespeare Selfie Challenge”, Or How I Learned to Stop Worrying and Love Modernity | O! What Learning Is

By Alex BenarziMarch 3, 2015 No Comments

This week, I wish to shine a spotlight on the CBC (Canadian Broadcasting Corporation)’s contest: The “Shakespeare Selfie” Youth Writing Challenge.

The idea behind the challenge is for students from grade 7-12 to write a monologue from the point of view of one of Shakespeare’s characters, demonstrating how this character would view a current topic. What the creators of the contest accomplish is bringing Shakespeare into the 21st century through the connection of characters to the modern socio-political climate. This is an excellent supplementary writing exercise for any grade level studying Shakespeare: teachers can explore the idea of archetypes and the way they view the world. Such an activity not only encourages students to see connections between the plays and their world, but to write in a specific voice – exploring the plays critically and creatively.

However, I do not simply wish to highlight and promote this writing challenge. I admit that when I saw the name “Shakespeare Selfie Challenge” I cringed a little. I am, I must confess, a recovering Shakespeare purist.

There was a time when I could not abide the “corruption” of Shakespeare by modernity. Baz Luhrmann’s Romeo + Juliet was an absolute nightmare to me. And when it came to education, both when I was a student and as a teacher, I thought that students were being patronized by having Shakespeare sugar-coated in the world of texting and tweeting. There are many who continue to hold this belief, and I sympathize with them. Having been on both sides of the debate now is why I love the question: does Shakespeare need to change with the times?

The “Shakespeare Selfie” challenge does not involve the taking of candid photos with an award outstretched arm: the title is just a way to catch people’s attention. In education, however, this is something we see all the time. I once worked with someone who believed that Shakespeare’s language was something that had be “gotten around” in order for students to appreciate the stories. The opposing view would say that Shakespeare’s language is as integral as the stories themselves. Is there anything gained by teaching Shakespeare with “No Fear Shakespeare” editions? Some say yes, and some say no.

Here is what I believe:

From movies, to reprinting of the text, to the infusion of the selfie into Shakespeare, anyone who works with Shakespeare makes his works their own. And this is our most valuable teaching tool. Refusing any anachronisms or “perversions” of the play in the classroom is ignoring a valuable opportunity.

But there is such a thing as too much. Teaching Shakespeare is not like setting up a casino: you do not need flashing lights and noises to attract students. As teachers, we should guide students to create their own interpretations and connections, not wave them in students’ faces to mask the “thous” and “forsooths.” 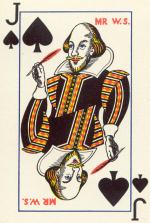 Yet this project, as well as Shakespeare In Action’s other programs for youth, is a great example of the essential balance that must be maintained in the classroom: they integrate Shakespeare into new forms, while maintaining and celebrating the original language.

The idea of sitting around reading the text in a vacuum, discussing plot, characters, and themes does not work: perhaps it never did. We must be willing to try new things, to make connections to the wider world, and allow students to “play” with the play. In the process, however, we cannot ignore the many advantages that tackling poetry has in a student’s development, and Shakespeare certainly presents some of the best poetry.

The “Shakespeare Selfie” Challenge is meant to be a fun name to attract attention: it does not exploit or “cheapen” Shakespeare’s works. I encourage Canadian educations to share the opportunity with their students, and for any educators teaching Shakespeare to see this as a good supplementary activity, and to continue to recognize our challenges in balancing the old and the new to teach Shakespeare as effectively and enjoyably as possible.

All the World’s a Stage | Global Shakespeare

All the World’s a Stage | Global Shakespeare

I am a teacher, actor, writer, and passionate about everything Shakespeare. I currently live in Toronto, Ontario, but that might be changing in the near future as I pack up my books and head off on a new adventure.