By Sarah WatersFebruary 26, 2016 No Comments

Reviewing new books is a job full of excitement particularly when they’re as beautifully presented as Will’s Words. With illustrations to rival Where’s Wally (or Where’s Waldo on the other side of the pond), this book will keep readers young and old engaged. Although marketed primarily to 7-10 year olds, Will’s Words kept this twenty-something absorbed.

Begun as a book to tell the story of Shakespeare, the Globe and early modern theatrical life, Sutcliffe opens with a disclaimer: Shakespeare kept getting in the way. (Well you know what they say.. Where there’s a Will there’s a way..). Not the ghost of Shakespeare past, don’t panic. Just his words – those he made up, and those which his plays introduced to the common vernacular.

The busyness of early modern England looms from the pages, and you can almost smell the streets of London (thank fully only almost) as you read the pages tracking some of Shakespeare’s theatrical history. My favourite page is one which shows the Globe in profile, with people popping up and down from trapdoors and balconies, the illustrations capture the excitement as well as the hustle and bustle of a play in performance.

But this isn’t just an illustrated story of Shakespeare, or of Shakespeare and his theatre but it also embraces, as the title suggests, all of Will’s wacky words. Ok not all, that would be a chunky book, but some of the most common phrases we use today, anything from ‘Oh my Goodness!’ to ‘Seen better days’. Short scrolls explain the bold highlighted words of Shakespeare offering you quotations where they appear in the plays, what it meant in Shakespeare’s period, and then (if it’s different) what it means now.

The bookstores will be full of Shakespeare books this year, what with it being the 400th anniversary of his death (in case you hadn’t heard..), but this is certainly one to watch out for when it appears in March. Will’s Words is accessible to all readers, and offering something new to the Shakespeare scholar and novice alike. The illustrations offer an opportunity to gaze down on the enormous audience of the Globe, see actors hurrying to get ready for the next show and imagine how Shakespeare’s London might have looked.

The ‘household words’ indebted to Shakespeare are presented in a new format surrounded by historical information, fun facts, and intricate illustrations. And as ever with Shakespeare you can never have ‘too much of a good thing’! 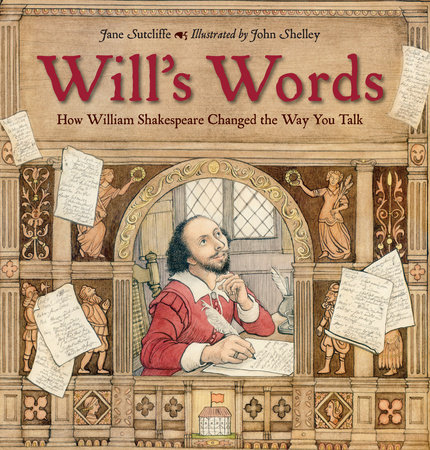 I’m always keen to read and review Shakespeare books, Shakespeare adapted novels, short stories, plays, or poems, do feel free to get in touch either by e-mail at sarahwaters@outlook.com or via Twitter where you can find me @srawaters